Through the initiative of the School of Law, Tarlac State University conferred the degree Doctor of Laws, honoris causa, to Supreme Court Chief Justice Hon. Diosdado M. Peralta on February 19, 2021 at the Bulwagang Kanlahi in Tarlac City.
2021 News Through the initiative of the School of Law, Tarlac State University conferred the degree Doctor of Laws, honoris causa, to Supreme Court Chief Justice Hon. Diosdado M. Peralta on February 19, 2021 at the Bulwagang Kanlahi in Tarlac City.

Hon. Peralta, the 26th Chief Justice, was conferred with this degree to honor his contributions to the justice system such as the declogging of court dockets, adoption of reforms that simplifies court procedures, and the promotion of a more disciplined and responsive judiciary. He is also noted for his speedy and scholarly disposition in criminal cases.

During the conferment ceremony, Hon. Peralta was assisted by his wife, Court of Appeals Justice Fernanda Lampas Peralta during the wearing of academic gown, along with Commission on Higher Education Commissioner Dr. Ronald Adamat and Legal Education Board Chairperson Justice Zenaida N. Elepaño.

According to SOL Dean Atty. Jose Dela Rama who read the petition to the LEB and citation during the ceremony, the courts remained open and accessible during the pandemic through the leadership of Hon. Peralta.

He added that the Chief Justice spearheaded the implementation of the 2019 guidelines on the use of videoconferencing technology for remote court appearance for testimonies of persons deprived of liberty in jails which was pilot tested in Davao City. This action enabled the judiciary to continuously enforce the justice system in the country despite the pandemic.

In a magazine of the Supreme Court, Court Administrator Jose Midas P. Marquez shared that the Chief Justice caused the distribution of Philippine Judiciary 365 accounts to the courts to enable the conduct of videoconferencing hearings after a month and half of lockdown and with the concurrence of all the members of the Court.

“The fact that I am here, being acknowledged for my judicial career and service to the public from the time I was a public prosecutor in Laoag, Ilocos Norte up to now, the final weeks of my term as 26th Chief Justice of the Republic of Philippines, is, for me, a recognition not of my achievements, but of my passion and dedication to my work,” Hon. Peralta said in his acceptance speech.

Upon his appointment as chief justice, he immediately presented his Ten-Point Program composed of judicial reforms in the core areas of efficiency, integrity, security, and service.

His Ten-Point Program focuses on the elimination of backlog in the Supreme Court and other courts; automation of court proceedings and applying technology in hearings and court trials; 24/7 help desk in the Office of the Chief Justice; and strengthening and improving the security of justices, judges, halls of justice and others.

Also, Hon. Peralta further reaffirmed the judiciary’s commitment to innovate reforms to guarantee that justice will continue to be served faster and without delay.

The 69-year-old Chief Justice is set to retire in March this year – a year earlier than the mandatory retirement – saying that he will retire without regrets. He also plans to return to the academe to teach remedial law, criminal procedure, special rules, and civil procedures.

“I will retire without regrets knowing that I did all that I could for the law, for the courts, and for the nation. I look forward to the world outside the Supreme Court with the thought that, at my age, life is still full of possibilities,” Hon. Peralta said.

The hardworking Ilocano Chief Justice followed the footsteps of his father, Elviro Lazo Peralta, who was a judge in Davao, and his uncle, Rufino, a judge in based in Manila.

Hon. Peralta is a law graduate of the University of Santo Tomas. He obtained his bachelor’s degree in economics at the Colegio de San Juan de Letran in 1974.

He was appointed as chief justice in October 2019. [Maria Adelaida D. Calayag] 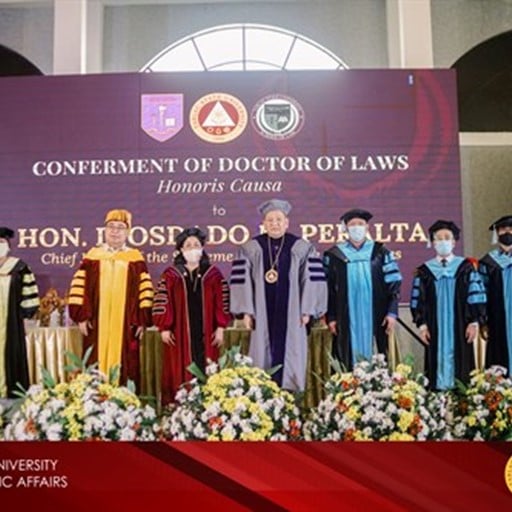